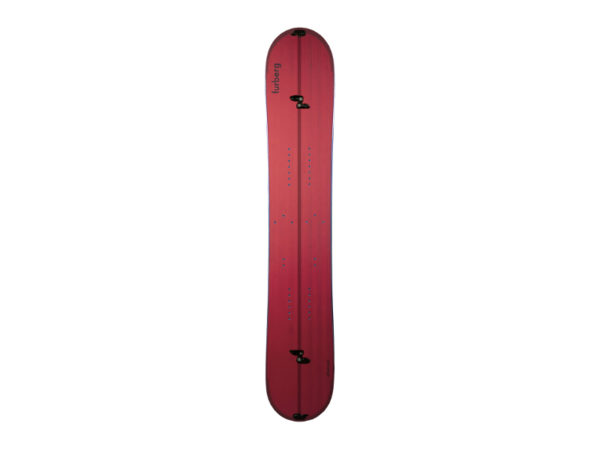 After requests from our team riders and customers for a snowboard with a sidecut radius somewhere between a traditional snowboard and the long radius of ”The Freeride”, we started to develop The All Mtn.⁠

The result is a directional all-mountain splitboard, built for playful freeriding in any type of snow.

A tongue and groove on the All Mtn Split eliminates movement between the board halves. The new splitboard assembles like a regular splitboard and rides like a snowboard.

Gone is the lack of response that splitboards used to suffered from.

It is standard to use a longer turning radius on a freeride ski than on a slalom ski in the skiing industry; however, Furberg Snowboards is the only brand to adapt the turning radius for freeride snowboards. A longer turning radius generates better stability at higher speeds and, more importantly, gives the boards a calmer and more forgiving behaviour by distributing the edge pressure over the entire contact length. The All Mtn Split has an 11 meter radius, which is slightly shorter than the radius of “The Freeride Split”. This makes it a more playful board without sacrificing the high-speed stability our boards are known for.

The best compromise between the flotation of full rocker, responsiveness, and grip of camber.

Increases flotation and makes the board slide over irregularities in the snowpack with less resistance. The very last part of the nose also has a slightly steeper angle to make touring with our splitboards easier.

“If you’d been tempted by the Freeride but where concern by the long turning radius, this might be for you. It’s a Furberg, but a bit less Furbergy………”