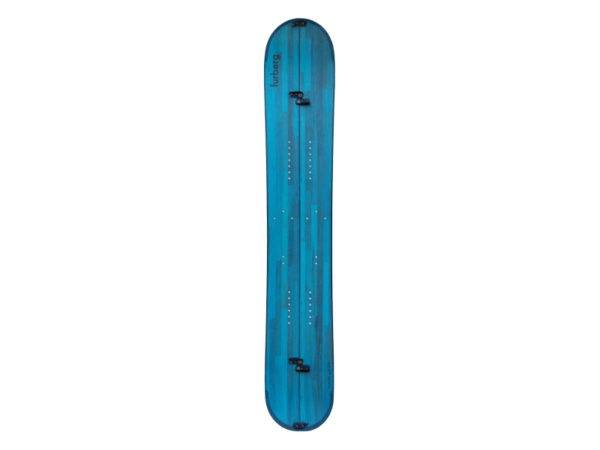 The Freeride Split was developed to tackle any kind of snow and terrain you might find in the backcountry.

The combination of high-speed stability, maneuverability and catch-free properties has made the Freeride Split one of the most talked about splitboards of the past few years. Its long sidecut radius makes the splitboard calm and forgiving, while the rocker and reverse sidecut in nose and tail makes it float remarkably well in powder and remain catch free in any situation.

New for this year, we’ve adapted the sidecut radius to work better in all conditions; still long enough for high speed freeriding, but slightly shorter than previous years to make the board more reactive. Also all rocker and reverse sidecut transitions have been tweaked for an even smoother ride.

This year we have made the turning radius slightly shorter than previous years to make our snowboards more responsive and playful on hardpack. But don’t worry, our boards still have approximately a 70 % longer turning radius than the average freeride board.

The best compromise between the flotation of full rocker, responsiveness and grip of camber.

Allows our snowboards to be even more catch free and maintain direction better when on edge than before.

Increases flotation and makes the board slide over irregularities in the snowpack with less resistance. The very last par of the nose also has a slightly steeper angle to make touring with our splitboards easier.

It is standard to use a longer turning radius on a freeride ski than on a slalom ski in the skiing industry; however, Furberg Snowboards is the only brand to adapt the turning radius for splitboards. A longer turning radius generates better stability at higher speeds and, more importantly, gives the boards a calmer and more forgiving behavior by distributing the edge pressure over the entire contact length.

We are using 100% Poplar for the perfect balance between weight, strength and ability to hold flex and shape over time.

The base is 1.3 mm thick, which is thicker than industry standard. This means that you can hit rocks harder without getting core shots and you can stone grind the base more times. Isosport 7500 Sintered is one of the fastest bases available on the market. The thicker base does add a few grams on the weight, but more importantly it gives the board a much longer life.

The Isosport Polyamide topsheet is one of the most durable topsheets on the market. The texture makes the topsheet very scratch resistant and less snow sticks to it. We also make all our topsheets in light colors to further avoid snow sticking to them. Dark colored topsheets get warmed up more by the sun and therefore more snow will freeze to them. This is a simple, yet effective way to save weight without compromising on durability and performance.

Triaxial fiberglass is used to get a good torsional stiffness of the splitboard.

“Tweaked for 2018, and with the new clear top sheet cosmetically they look a lot better. Consistent test winner, and a popular choice at the UpBattle! Available with a package including Furberg Skins.”