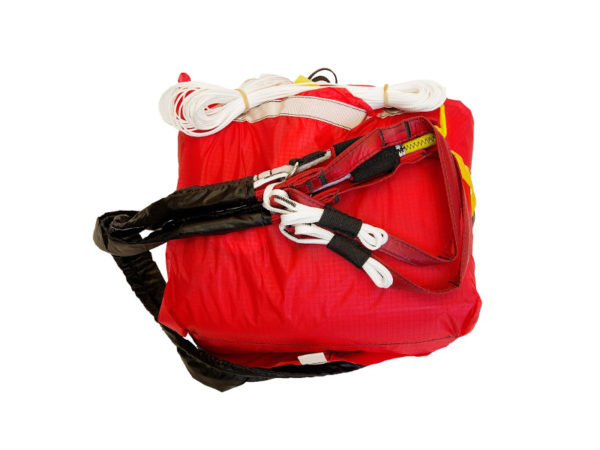 Until now Rogallo parachutes have always been heavy and bulky and the fact that they glide immediately after opening limited, in our opinion, their suitability for cross country pilots (severe risk of mirror effect, risk of being on a collision course with an obstacle if the pilot does not immediately steer the parachute).

The Krisis Rogallo II incorporates an innovative system allowing it to behave like a hemispherical parachute during the initial phase after opening, descending vertically in a stable manner with very little forward speed. Thus in the case of a very low deployment the pilot only has to think about landing correctly (parachute landing fall), without having to worry about eventual complications.This safety enhancing feature is only possible due to the large surface area of theKrisis Rogallo II.

In the case of a deployment at higher altitude the pilot can, in a second phase,take control of the brakes and benefit from the incomparable glide ratio and sink rate of the parachute which give it an undeniable safety advantage over a hemispherical parachute.

The Krisis Rogallo II weighs just under 2kg including the inner container for a surface of 42m². We have chosen only the best materials and thanks to a light fabric that is both strong enough and highly durable, as well as a new type of suspension line, the weight and volume are very low despite a surface area of 42m².

Characteristics of the Krisis Rogallo II

Thanks to its particular shape and specific packing method the Krisis Rogallo IIopens up to 50% faster than a standard round parachute. The specific packing technique renders cravats practically impossible.

A new feature is the fully braked configuration of the canopy upon opening which greatly reduces the horizontal displacement. This corresponds to the wish of many pilots to benefit from the advantages of a round parachute which descends vertically combined with those of a Rogallo which can glide and is steerable. When opened near a rock face for example the Krisis Rogallo II descends almost vertically. The canopy only starts to glide forward once the pilot takes control of the brakes.

The deployment of the Krisis Rogallo II is the same as that of a normal reserve parachute (pull and throw). It slowly moves forward and can be steered with the two brakes even if the paraglider remains attached: this slow horizontal airspeed reduces the loading on the paraglider allowing it to be B-stalled with only one hand. The other hand can thus be used to steer the parachute.If a quick release system is used to release the paraglider the Krisis Rogallo II can be used to its maximum effect: the glide ratio is doubled for a slight increase in the sink rate.

Installation in the Harness

Although the EN/LTF flight tests showed a 3,7 m/sec descent rate at 100 Kg, our own experience also tells us that highly loaded Rogallos, like conventional reserve parachutes, can lead to mirror flying or down-planing when combined with the paraglider. This mainly happens with very stable and collapse resistant school gliders, or in very steady throwing conditions such as training openings over water. The EN/LTF practical tests are always carried out in separated configuration – without the troublesome paraglider. When developing our Rogallo reserve parachutes we focus a lot of attention on the overall functioning spectrum, above all in connected condition (when the paraglider is not cut away).(*) Extended Weight Range

Despite the positive flight tests at more than 100kg we recommend that the extended weight range is only for use by experienced “Rogallo pilots”, or in conjunction with a reliable cut-away system.