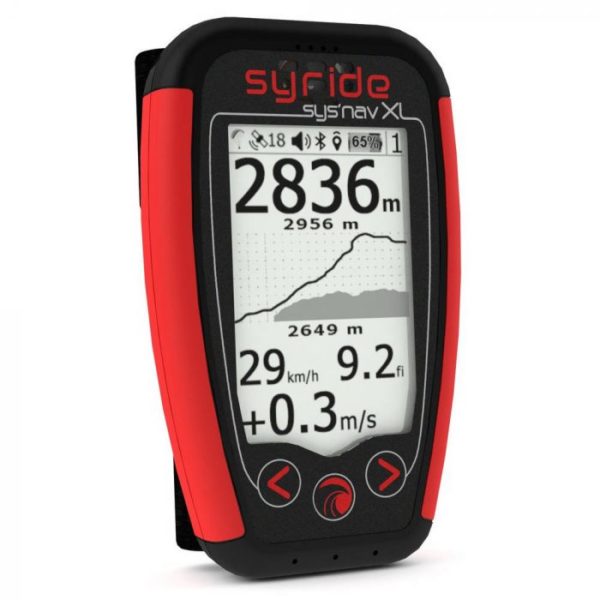 The result is clear, the SYS’Nav XL is today the most versatile and lightest instrument on the market. Whether you are a beginner, an XC pilot, a Hike’n’Fly pilot, a Vol Bivouac pilot, an adventurer, a PPG pilot or a competitor, the SYS’Nav XL will be an ideal companion during the entire career of a pilot.

The SYS’Nav XL is a new instrument in the range. It is positioned between SYS’Nav V3 and SYS’Evolution. It is not intended to replace the SYS’Nav V3.

Display
This is the first thing you’ll notice when you’ll take a SYS’Nav XL in your hands! 30% larger than its little brother’s, the 2.7” screen has an active matrix reflective technology similar to the one used in the SYS’Evolution. The advantages for the pilot are clear:


– Optimum readability outdoors (the more sun, the more contrast)
– Lower consumption (80% less than a traditional screen and no need for backlighting)

Speaker
Integrating a loudspeaker to find the same kind of sound as on the SYS’Evolution was complex. We wanted to keep an output on the front face which allows to avoid losses. In spite of the bigger screen, we managed to put a 1 Watt speaker (0.5 Watt on the SYS’Evolution) while respecting the manufacturer’s recommendations to obtain the most perfect sound possible!

Bluetooth
Amongst it’s many impressive features the SYS’Nav XL also offers Bluetooth connectivity, in case you’d like to connect it to Android or iOS flight apps. So far this has only been tested with XCTrack (Android) and FlySkyHy (iOS). Syride are also working on a new complimentary flight app, which they say will be released on Google Play store soon as a beta version (with limited features to start) and will on Apple Store this autumn.

Connectivity via USB-C
Expected for its simplicity of use and its reversibility, the SYS’Nav XL has now a USB type C plug. A new plastic injection mold had to be produced to support these new evolutions (screen, speaker, USB…). The file management has also been completely revised! It will be possible to communicate with the SYS’PC TOOL software as before, but also to access the flight data (IGC files) as if a USB disk had been connected. The pilot gains in convenience, he will be able to use his existing phone or action cam cable to connect the instrument and will not have to use the SYS’PC Tool software to access the flight files.

Battery and Charge Manager
The surface of the electronic board has been reduced to accommodate a battery with a capacity 40% higher than the SYS’Nav (850mAh against 600mAh), it is essential to meet the needs of the very energy-hungry speaker. It is the level of the sound volume and the activation of the sink sound that will have the most impact
on the battery life of the SYS’Nav XL! The addition of a dedicated charge manager allows to have a very precise state of the battery charge value. Voltage variations will not affect the displayed information.

Syride Tools (including manual)
Syride have gathered some useful Tools on their website: