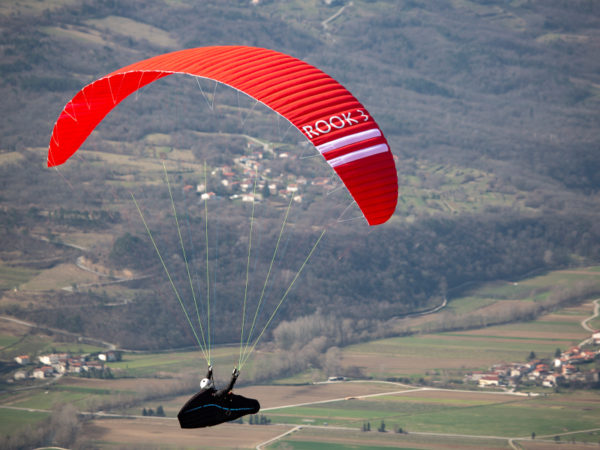 We’re often told that “it isn’t the wing, it’s the pilot”. And while it is true that no wing will make a bad pilot great, it’s also true that an extraordinary wing WILL seriously improve your flying! The Rook 3 (EN B) is that wing; a paraglider to make the very most of YOUR skills.

New look!
The looks made to support the Triple Seven philosophy, performance, and safety optimization above all. The new design incorporates the smallest number of seams possible. Just about any stitch in the canopy is there for the performance purpose. Only the coloring of the panels creates this beautiful racing look.
When we deducted the number of the seams, we ended up with canopy with a significantly reduced percentage of pressure leakage. We created a canopy, pressurized to the highest point possible at any given flying regime.

“Pilots in this certification bracket (the top end of the EN B class) tend to be ambitious and hungry for more, but also quite sensible when it comes to assessing their own skill level. So when designing for them we need to figuratively stuff new models with performance in spades while making sure that the new wing has no hidden vices.

We knew even before we began this project that it would be a hard call to improve the Rook 2 in enough ways to make it a worthy successor – so instead of starting with the original, we based the new wing on the Queen 2, our class-bursting EN C wing. The trick was to preserve the Queen 2’s great performance and handling characteristics but to make it suitable for EN B pilots likely to have a slightly lower comfort threshold in rowdy air. After lots of prototyping, testing and trimming we can now say that we’re there.”

The original Rook was the first product from Triple Seven to hit the market, and it made a big splash already then. Now in its 3. and much-improved incarnation, the Triple Seven Rook 3 is still a high-end EN B wing. It is made for ambitious leisure pilots, perhaps with a desire to do more ambitious cross-country flights, provided this can be done on a wing with a sound passive safety margin.

You’ll get the most joy out of a wing in this class by being current, with probably 50+ hours in active air each year, and with some XC skills to your name. Your style is quite assertive; you generally know where you want to go next and why, and you are happy to use the speed bar to improve your overall performance and safety levels. You are familiar with quick descent methods and with large, coordinated wingovers, or at least you’re working on this compartment in your free-flying toolbox, out of a desire to improve, to the benefit of safety and performance alike.
If this sounds like you then you’ll have buckets of fun on the Rook 3 – it’s a wing practically custom-built for you, and it’ll take you places you have previously only been dreaming of. Welcome on board!

The S/M size (80-95kg) is certified now. The other sizes are coming, but will be delayed by Covid19.

“Looks fantastic, like a baby Gambit! The Rook 2 went very well, so this one should be very, very, good. We’ll have demos ASAP”