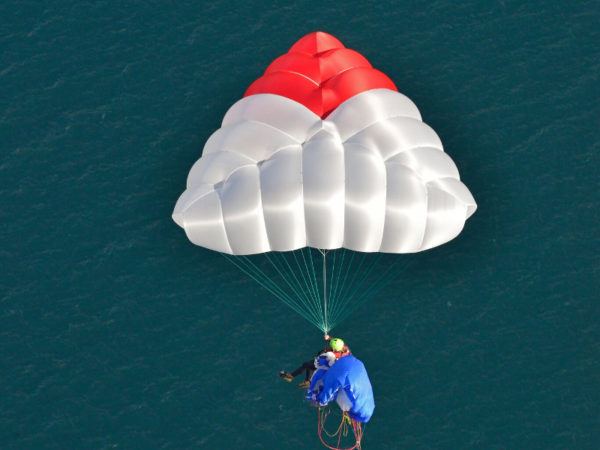 The X-TRIANGLE is a new kind of
paragliding and hang gliding rescue system
that combines several advantages of different systems.

We didn´t just match a few existing systems together, no we developed a complete new rescue system. Not only the shape is new, but also its mode of FUNCTIONING. Immediately after deploying and opening of the canopy, the X-TRIANGLE sinks vertically and does NOT generate any FORWARD MOTION. The canopy is FULLY
SYMMETRIC straight after the opening. There is no pre-brake like on a rogallo canopy.

The pre-brake on a rogallo brings just a little slow down of the forward speed and definitely NO slow down to zero speed. A rogallo rescue is already from the construction side build asymmetrically and has always a GIVEN FORWARD motion, without this motion the rogallo would stall like a paraglider.

That´s one of the big differences to our new X-TRIANGLE system. Because of the SYMMETRICAL CONSTRUCTION of the X-TRIANGLE this rescue DOESN´T start to fly forward after the deployment and reduces so the danger of a down-plane (scissor position) substantially. With a rogallo the pilot should at least destroy the paraglider, bring it in or disconnect it from the harness to avoid a possible down-plane. Who already experienced this one´s during flying (and not in a SIV, because there the pilot knows what is coming next) knows what he can expect in a worst case scenario.

Thus, the X-TRIANGLE system is also suitable for absolute beginner pilots from the first day on. The pilot is now not forced to catch the paraglider after a rescue opening because the X-TRIANGLE does NOT generate an unwanted FORWARD DRIVE immediately after opening and so it can hardly come to a down-plane. However, if the situation makes it possible we recommend to bring in the paraglider, make it unflyable, or even disconnect it.
(see the operating manual for more information)

The X-TRIANGLE sinks extremely pendulum-stable due to its novel 3-CORNER CONSTRUCTION, the triangular shape has a self-stabilizing effect. If the CIRCUMSTANCES REQUIERE it and the pilot has to avoid an OBSTACLE or to make a POINT LANDING, he|she can initiate the FORWARD DRIVE by pulling one or both control lines and STEER the forward motion in the desired direction by pulling a control line – left or right.
(see operating manual)

The X-TRIANGLE is the FIRST RESCUE device WORLDWIDEwhich has NO FORWARD SPEED right after the opening, SINKS VERTICALLY and begins the CONTROLLABLE FORWARD FLIGHT only by ACTIVELY ACTIVATING of the pilot. As a result, the X-TRIANGLE is unrestricted for ALL pilots.